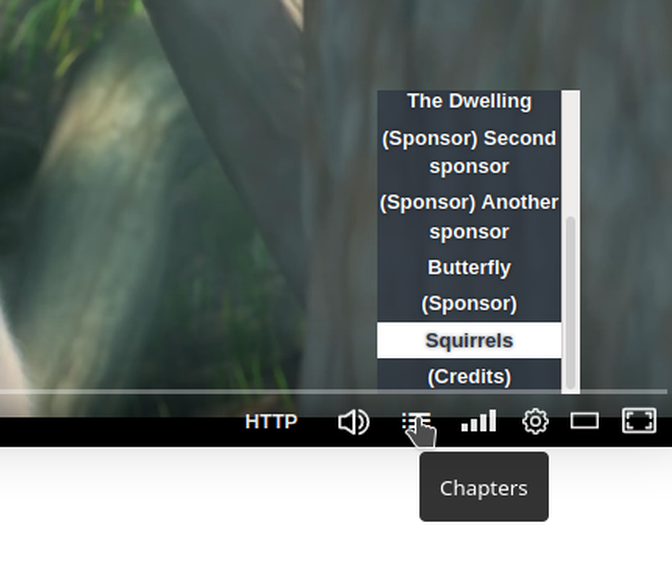 This plugin adds support for listing chapters when uploading a video. They will then be shown in the chapter menu button when users play a video, and will be available to other plugins. Chapters are specified under the "Plugin settings" tab when editing a video.

They can be specified in a format such as:

Any hyphens, colons, and spaces after the timestamp and before the text are ignored, so "0:05 - The first chapter" is equivalent to the above.

Or using markdown lists of links.

The resulting WebVTT data can be previewed by hovering over the input box until the mouseover text appears.

Tags can be added to chapters by prefixing them in parenthesis. The supported tags are similar to SponsorBlock and include "Sponsor", "Self-promotion", "Interaction reminder" (like, comment, subscribe), "Intro", "Intermission", "Outro", "Credits", or "Non-music" (segment of music). These tags are added to chapter data available to other plugins.

Chapters can be accessed by other plugins using the text track added to the video (player.remoteTextTracks()), and through video.pluginData['table-of-contents_parsed']. It contains an object of the form:

Only instance administrators can install the plugin. You will need at least PeerTube version 2.4. To install it, go to the "Plugins/Themes" tab in the administration settings. Then choose "Search," and search for Web Monetization.

The code is available in the repository on GitHub.